Susan and Fayez Sarofim, the billionaire behind Houston-based investment firm Fayez Sarofim & Co., donated $25 million for the project — the largest gift Memorial Hermann had ever received when it was announced in February 2018. The Sarofim Pavilion was part of a roughly $700 million renovation and expansion project at Memorial Hermann-Texas Medical Center, according to Memorial Hermann.

“The Sarofim Pavilion enables Memorial Hermann to stay ahead of the fast-growing advances in medicine, keep pace with the extraordinary growth of the greater Houston metropolitan region and, most importantly, meet the health needs of our community for years to come,” David Callender, president, and CEO of Memorial Hermann said in a news release.

Operations for Memorial Hermann’s air ambulance service, Life Flight, moved on top of the new tower. The new John S. Dunn Heliport is 10,000 square feet larger than the old helipad and is capable of handling the weight of a Black Hawk helicopter.

“As the Houston community is growing by leaps and bounds, the need for access to quality health care increases exponentially,” Susan Sarofim, chair of the Memorial Hermann Foundation board between 2015 and 2017, said in the release. “Memorial Hermann has stepped up to the plate to deliver a new facility with greatly increased patient capacity and state-of-the-art equipment. Fayez and I are so proud to support Memorial Hermann as the health system continues to deliver award-winning, innovative care to the Houston community.”

Construction began on the Memorial Hermann-TMC expansion in 2015. The building of Sarofim Pavilion took over 5,500 workers and 3.5 million man-hours, according to Memorial Hermann. Houston-based Vaughn Construction served as the project’s general contractor. 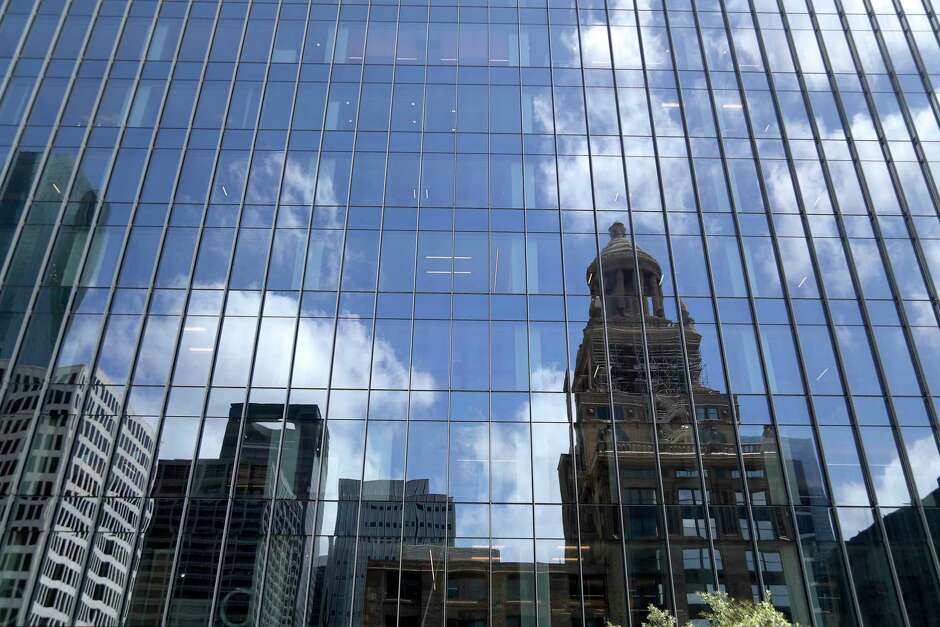 Houston’s office market is bracing for another tough year as the energy industry shrinks in the face of lower oil prices, which dipped this week to their lowest level in more than a year.

“It remains a tenant’s market,” Lucian Bukowski, an executive vice president with CBRE, said. “I see that continuing.”

Oil companies, which have been steadily cutting costs and laying off workers, account for more than 30 percent of the local office market, said Bukowski, who represents companies looking for space. Demand is falling among other industries, as well. Leasing activity last year was down 17 percent from the previous year, CBRE data show.

That all amounts to a harsh reality for landlords carrying empty office space, and there are a lot of them. The vacancy rate for so-called Class A buildings — the newest properties with the most amenities — was 17 percent at the end of last year, the highest it’s been since at least 1992.

Large blocks of empty space fill skyscrapers from the city center to the suburbs. One of the former Anadarko towers in The Woodlands will be vacant by next month. The company was acquired by Occidental last year and employees are being consolidated.

Bob Parsley, co-chairman and principal in the Houston office of Colliers International, which is leasing the building for owner Howard Hughes Corp., said there’s been a strong interest in the tower.

“We were frankly very happy to get this building into the Howard Hughes portfolio because we didn’t have much space to lease,” Parsley said. “That market is tight up there.”

Energy tenants are critical to the local office market. Yet employment in the industry is shrinking.

Houston is expected to gain 42,000 new jobs this year, but it will lose 4,000 in the energy sector, according to the Greater Houston Partnership.

The energy sector won’t be a significant driver of demand for potentially years, said Patrick Duffy, president of Colliers International in Houston. Growth in 2020 is expected to come from health care, government, accommodation/food services, and construction, yet many of those companies are not big enough to lease the large blocks of space currently on the market.

Houston is a roughly 213 million-square-foot office market. It could be a decade before the market returns to equilibrium, meaning anywhere from 11 to 13 percent occupancy, Duffy said.

“That’s assuming we don’t build a lot more and we don’t have a recession,” he said.

Companies shopping for space today have leverage. Landlords are offering free rent, parking discounts, and generous tenant improvement allowances. Annual per-square-foot asking rents in Class A buildings range from $32.20 in the suburbs to $54.67, according to Colliers.

That’s why so many property owners are making improvements. Even Williams Tower, one of the city’s most prestigious office buildings, is undergoing a lobby facelift.

Bandy recently represented XCL Resources, a private oil, and gas firm, in a lease for 16,328 square feet at M-K-T, a new adaptive reuse project in the Heights. JLL is representing the landlord, a partnership of Radom Capital and Triten Real Estate Partners.

The development includes a collection of industrial buildings that are being repurposed to house offices, shops, restaurants and health, and fitness concepts.

Bandy and others said companies are looking for spaces that will wow potential employees and help retain the ones they have. To that end, new mixed-use developments and downtown towers with an abundance of amenities are winning out. 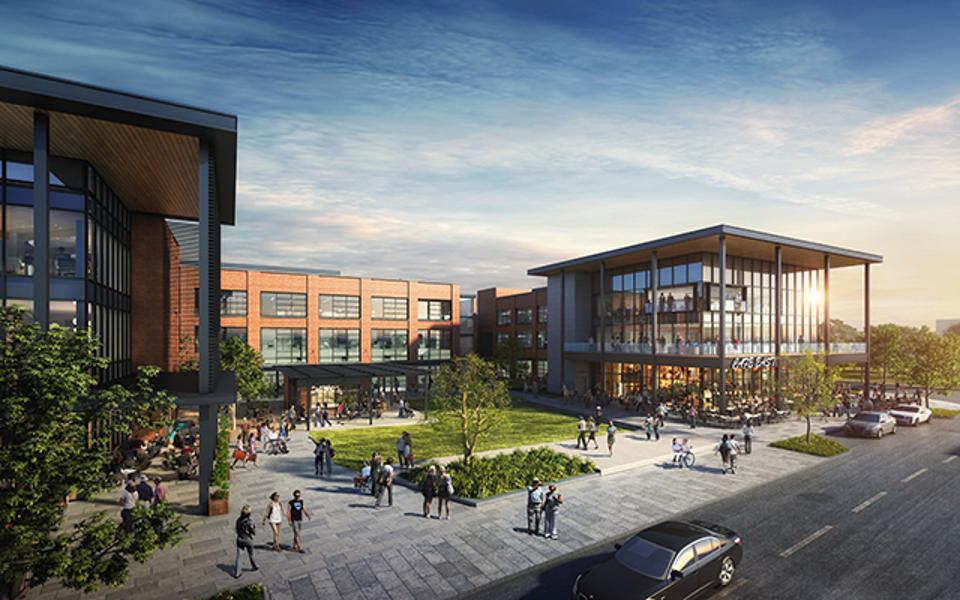 An interpretation of mixed-use development, The Center for Pursuit’s next-generation facility broke ground this week in Houston’s East End, where it will relocate in 2021 to serve, support and empower the city’s adults with intellectual and developmental disabilities (IDD).

From its new campus, which starts construction next month, the nonprofit organization will also reach out into its neighboring communities with programs, public spaces and some retail, including a café.

The new buildings include a residential tower of 41 units; a programs building for adult training, employment services, and adult activities; a health and wellness building with fitness, medical clinic, cafeteria and café; and an administration building housing a welcome center, conference space, incubator workspace for other non-profit startups and one of the vocational programs.

A United Way agency, the 60-year-old organization now serves 450 clients, has 40 residents and provides daycare to 300 severely disabled adults, many of which arrive by Metro van daily, according to organization sources at the groundbreaking event.

The pedestrian-friendly project’s new location on an infill parcel near downtown is served by Houston’s Metro Rail, something key to site selection, project leaders said at the event, attended by representatives of city, county and state government, related agencies, East End community leaders and current clients.

Including property acquisition and improvements, the project’s total cost has an estimated value of $71 million, said Charles C. Canton, the center’s president, and CEO. Construction is slated to begin in early February, with completion substantially completed in early 2021, he noted in a follow-up statement.

Funds raised to date have included the sale of the organization’s long-term facility on six acres overlooking Buffalo Bayou as well as a phased capital campaign. The most recent push, tagged “Strive,” closes the remaining $16.5 million sought, Canton said.

Part of the new project’s vision process (and fundraising) was a 4,000-mile bike ride to assess best practices at 30 facilities coast-to-coast, led by David C. Baldwin of SCFPartners, a board member and Pursuit Foundation trustee, and a series of charrettes. Integrating and providing choice to the spectrum of constituencies served by the facility was paramount to the planning, he said.

Houston’s East End is a multi-ethnic community where many of the city’s early industrial properties are under redevelopment, re-purposing, and replacement by both commercial and residential uses, especially townhomes.

Meanwhile, Buffalo Bayou Partnership last fall revealed its park and recreation master plan for the five-mile stretch of the bayou winding through the East End.

With gentrification concerns, a neighborhood issue, having community input as part of the new center’s planning process so that there was a relationship of trust established, said Marilu Garza, chief development officer for the organization.

“The beauty of the design is that it supports The Center’s mission of everyone having value and purpose,” noted Kristopher Stuart, Gensler principal, and design director, in a follow-up inquiry. “The Center for Pursuit and its board are to be applauded for the bold initiative they are taking to imagine a facility that not only serves their clients differently but also helps the rest of the society imagine a different role for these unique individuals.”

Open and Activated for Opportunity and Outreach

The project required creating a collection of buildings that serve their unique purpose while embracing the unique East End community, Stuart said. The buildings incorporate warehouse-style brick and exposed, painted steel beams to “reflect the historically industrial yet emerging character” of Houston east of downtown. In addition, the “aspiration” was for the facility to be embedded in the life of the surrounding community as well as a participant in it.

Garza noted the new site and build-out has higher visibility for the organization. “We want to be seen,” she said. “It’s important that the community embrace us.”

Canton said, “We’re excited by the quality of the new buildings.” To have renovated the existing ’70s vintage existing facility was cost-prohibitive. Hanover Co. acquired the property last year as part of its plans for a mixed-use development.

Since then, The Center for Pursuit has moved its administrative functions, programming, and daycare for severely disabling clients to a temporary facility south of downtown. The organization’s residential building, however, remains in use until the completion of the new residential building on the new campus, so that residents need only be moved once, Garza said.

At the groundbreaking, Houston Mayor Sylvester Turner spoke of Houston’s notable diversity, adding “being diverse means little if you’re not inclusive,” which the new facility has as part of its mission. The beauty of the center’s build-out — for a population often overlooked, he said — “speaks to our city’s values.” 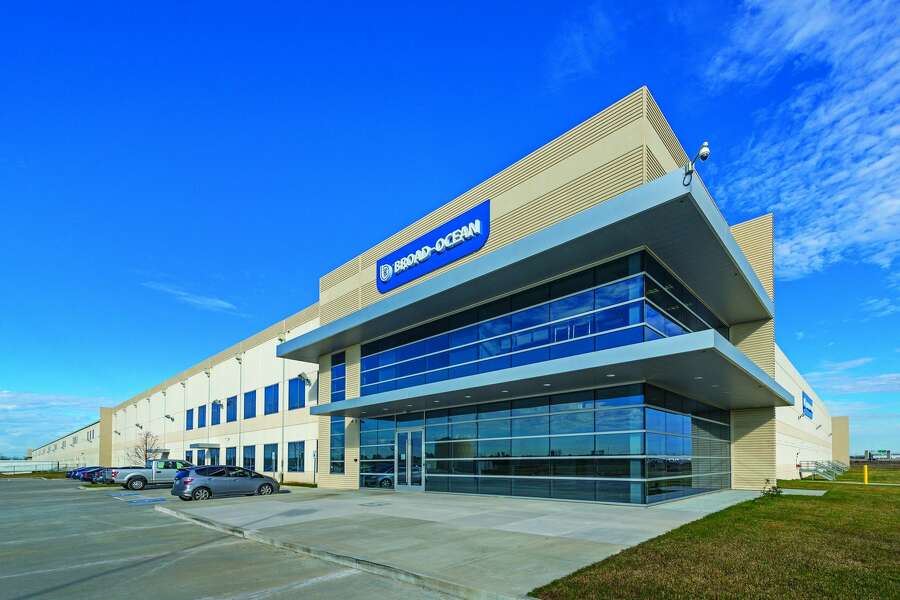 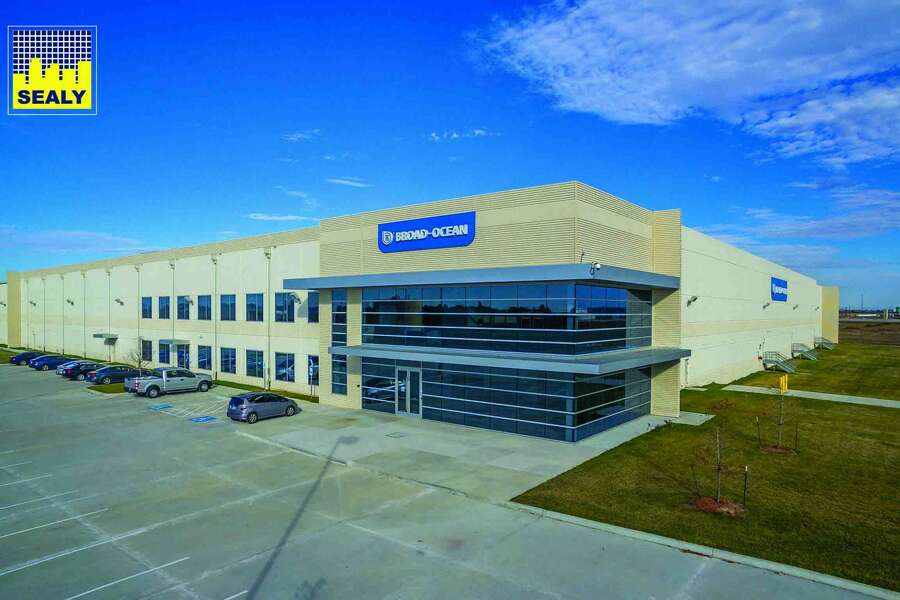 The 479,806-square-foot building at 18140 Kickapoo Road was acquired by Sealy Industrial Partners for an undisclosed price.

The property, on the south of U.S. 290 about eight miles past the Grand Parkway, was developed by Broad-Ocean, a China-based manufacturer of electric motors. The building is across U.S. 290 from the expansive Daikin Texas Technology Park. Broad-Ocean is a supplier to heating and cooling equipment maker Daikin.

Broad-Ocean, which leases the property, offer the new owner stable occupancy for several years, according to Sealy & Co.

“This is a core asset with features we believe to be attractive to many of the surrounding manufacturers, suppliers, and distributors,” Sealy said. “We’re looking forward to executing our strategy of acquiring at a discount to replacement cost and stabilizing the asset.”

For more information on Houston office space, Houston retail space or Houston warehouse space and Houston industrial space, please call 713 782-0260 or see my web site at: www.houstonrealtyadvisors.com  Thank you for your interest.