The 2,000-square-foot store opens April 1 at 2019 Bennington St., near the Hardy Toll Road and the 610 Loop. It will sell food targeted for individuals of African descent, almost all handmade by Rhodes and his team — and they’ll teach customers how to use the more unfamiliar goods, he said. The intent is eventually for the entire stock to be either handmade or grown by Rhodes. But because the store is opening early to help people amid the coronavirus pandemic, the garden Rhodes is creating for the store’s produce isn’t ready yet.

Products at the store will include sodas, sauces, condiments, pastries, jellies and butter, ice creams and popsicles, deli meat, sausages and dried items like jerky, all handmade. Typical items like dill pickles and hot sauce are sold alongside more unusual fare, like okra seed coffee ice cream and fermented strawberry and grapefruit soda.

Rhodes has never been interested in selling others’ goods. Over time, the store will be 100 percent self-sustainable.

“That way, we’re not buying produce from local farmers; we are the local farmers for our own grocery store,” Rhodes said.

Rhodes and his wife, Chana, are making the grocery store’s savory goods, while pastry chef Meredith Larke is handling all sweets and baked goods.

Meanwhile, Indigo is currently closed until September, which is not unusual for the acclaimed restaurant. Rhodes actually closed the restaurant at 517 Berry Road even before Harris County ordered restaurants to close their dining rooms. He brought over his entire staff — five people — from Indigo to Broham.

“I couldn’t take care of them,” he said.

Rhodes isn’t concerned with expansive growth, at least not right away. With the “grow its own supply” model, Rhodes says Broham is unlike any other grocery store in the country. It’ll take time to get its systems in place.

Rhodes hopes his store, located in the Trinity Groves neighborhood along with Indigo, sets an example for others to grow their own food. He also hopes that it cuts into the force of “food apartheid” — a term he uses instead of the food desert. He learned it from celebrity chef Marcus Samuelsson, according to a recent Texas Monthly article. It means a food shortage created by design, harking back to neighborhoods designed to disenfranchise African Americans. Growing your own food, Rhodes said, would be especially impactful now. 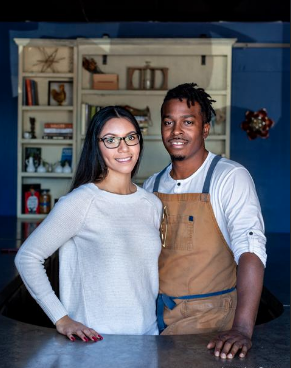