Worst Vacancy Since The ’80s

Despite leading the nation in the percentage of workers back at their desks by one oft-cited metric, Houston’s office market remained sluggish in the third quarter as an abundance of new product, limited demand and the impact of the resurgent delta variant of the coronavirus combined for a disappointing result in the quarter that was supposed to be the turning point for the better.

Madison Marquette’s latest report highlights several signs of life for the sector, including slowing occupancy losses and increased tour activity suggesting some pent-up demand. But in the main, it paints the picture of continued struggle, including the seventh straight quarter of negative absorption and the highest vacancy rate since the 1980s.

Another 606K SF of office space became vacant in Q3 for a year-to-date total of 2.1M SF. With new product coming online, the vacancy rate has surged 170 basis points to 23.7% for the first nine months of 2021. According to the report, developers have delivered 653K SF of new product so far this year with an additional 2.3M SF on the way by year’s end.

“As a result, direct vacancy levels are expected to climb even higher through the end of the year,” the report said.

The report noted there are “increased signs of stabilization as we move into 2022,” but those signs aren’t making much of a dent so far. Leasing volume totaled 2.4M SF in Q3, but it still lags pre-pandemic averages from 2017-2019 by 45.8%. Tour activity is up, the report said, “but has yet to translate to notable deal volume.” And though sublease availability declined for the first time since the onset of the pandemic — down 468K SF to 7.6M SF overall — the report points out that might not be a trend given employers continue to reassess and downsize office footprints.

“The full impact of hybrid and remote work strategies have not yet been felt but many occupiers are currently exploring ways to optimize their office footprint and seeking more flexible lease terms and obligations,” the report noted.

The report comes as Houston jumped 8.2% in Kastle’s latest Back To Work Barometer to lead the nation’s metros in terms of workers back at job sites. As of late September, the keycard security company said 48.7% of Houstonians were occupying physical offices. Yet office brokers and experts at a September Bisnow event said that after ramping up during the spring and early summer months, leasing activity slowed with the approach of fall and rising cases of the delta variant, reflecting a reluctance for decision-makers to pull the trigger.

Madison Marquette said Class-A properties are bouncing back more quickly, with 550K SF in occupancy losses so far this year versus a whopping 2.6M SF in 2020.

“However, Class-B properties continue to face challenges with 1.5M SF of occupancy losses YTD as recent business contractions and a flight to quality trend continues to impact the sector,” it said. 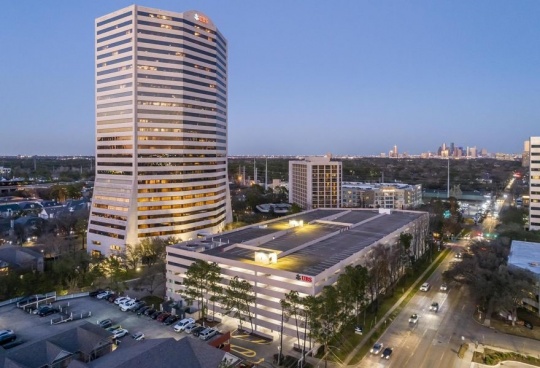